Photography is something more than just a hobby for me. In the context of visual culture, I find photography to be a good medium to talk to people about beauty of everydayness and meaningfulness of life in all its forms.

My book “Photosophy” – combination of philosophical texts and photoalbum – was published in Laurus (Kiev, Ukraine) in December 2017. The review of the book is here. It is on sale here.

My photo exhibition “Inventing Distances” was opened with an experte discussion on postsocialist inequalities at Europe University Viadrina on 24 October 2017.

My exhibition opened at the Fulbright Gallery (Esplanadna, 20, Kyiv). A report on the opening is here.

The concept of the photo is here:

The choice is real if and only if there are more than two options.

“We are our choices.” This phrase of Jean-Paul Sartre’s is not a factual statement; it’s rather a dream. Too often our choices are made in situations of binary opposition. Consequently, we make a ‘simple choice’ between good and evil, between black and white, between backwards and forwards.

However there is nothing as false as ‘simple choice’ in our complex reality. If we don’t see the third option, then the real choice has been made before us: by another person, by a context, by a tradition, by anyone but us. So, are we someone else’s choices or our own?

Humans live by creating meanings and senses. In this sense-creation our cognition proves to be intersubjective. This means that each experience is simultaneously mine and ours. It also means that each act of cognition is individual and social at the same time. We make sense and in doing so manifest my-self, our-selves, and that which is between Me and Us. Anonymous instances, which provide us with the media to make sense, support the societal nature of knowledge. Languages, traditions, habits, myths, ideologies and discourses contribute to these anonymous instances. Covertly, together with the media, they supply us with sense.

A sense, therefore, can be both subjugator and redeemer. Critical philosophy provides us with a gift of hope for emancipation from those anonymous ideological frames.

Photography has a huge power that can serve well to subjugators. As any other art, photography is believed to represent reality as it is. It simply traces the light and shadow of the present. But a frame chosen by photographer attains an ideological function: it puts the viewer into a perspective that s/he didn’t choose. In this way the photographer becomes an owner of the viewer’s sight.

Yet photography can also demolish subjugation. The third color in the traditional black-and-white photos represents an opportunity for a third alternative in our choices. I produced and selected a number of three-color pictures that might provoke a viewer’s suspicion in regard to my own intentions. I call for a fire of distrust towards myself, and towards the choices I propose, in hopes of waking a critical philosopher in the viewer of my photos.

Indeed, the choice is real if and only if there are more than two options.

(Thanks to Mayhill Fowler for editing!)

My colleagues (Anton Tarasyuk, Nadia Chervinska, and Yulia) and I delivered reports on the ontology of photography at the Marushchenko School of Photography in Kiev, 9 July 2019. 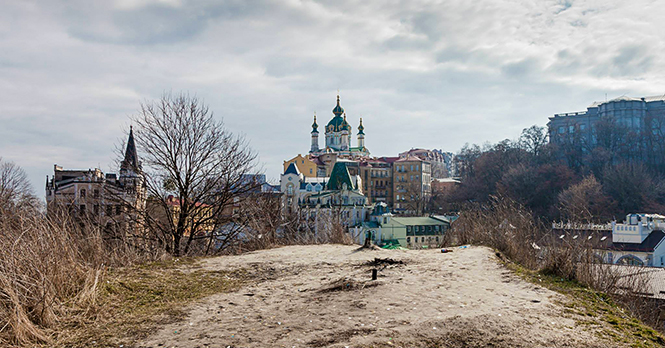 Shine and Shadow of Italy